At the Minebea Group, plants and other facilities take the lead in performing vigorous local contribution activities, environmental activities, etc.
This section reports on wide-ranging activities performed in various locations in 2013.

NMB-Minebea Thai's Bang Pa-in Plant participated in the First Pra-In Health Festival, organized by the municipality of Pra-Intaraja near the plant. The objectives were to educate local ... more

Sixty employees representing NMB-Minebea Thai participated in a project to plant 400 trees as part of a mangrove reforestation effort in Bang Pakong, Chachoengsao Province to the east of ... more

"Work in harmony with the local community" is one of the Five Principles of Minebea's management policy. In Thailand, this principle has long been put into practice. Here we introduce CSR ... more

At its Karuizawa Plant in November 2013, Minebea Co., Ltd. held its 2nd biannual meeting with representatives of Miyota Town, Kitasaku District, Nagano Prefecture, where Minebea's headquarters is located. A previous meeting was held in May 2013, ... more

Mayor Yuji Motegi of Miyota Town and Minebea's General Manager of Plant Maintenance Department, Kazunari Shimizu, were in attendance at the Miyota Town Office in October 2013 when an "Agreement on Heliport Use in Times of Disaster" was ... more

A Regular Meeting was Held with the Citizens of Miyota Town, Nagano Prefecture

In October 2012, Minebea held a stakeholder dialogue with citizens of Miyota Town, Kitasaku District, Nagano Prefecture, where the company's headquarters is located. During the dialogue, it was decided that a regular meeting will be ... more 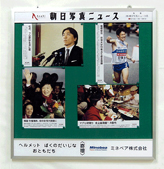 Employees from Minebea's Karuizawa plant visited Miyota Junior High School in Miyota-machi, Kitasaku-gun, Nagano Pref., where the plant is located. As part of the company's efforts to educate and support the future generation of young ... more