It is on the page of Minebea's Bearing with 1.5 mm in Outer Diameter achieved a GUINNESS WORLD RECORDS™ title for the Smallest Commercially Available Steel ball bearing

Yoshihisa Kainuma, Representative Director, President and Chief Executive Officer of Minebea, said: "We are really delighted to learn that our miniature ball bearing, a cornerstone of Minebea, was certified as the world's smallest mass-produced steel ball bearing by GUINNESS WORLD RECORDS. This achievement can be attributed to the unfailing efforts of our engineers and all others involved in the product. Minebea's mission statement—Passion to Exceed Precision—entails two meanings: a passion for achieving further precision and another passion for embarking toward uncharted territories. This award embodies the former passion. We will redouble efforts to create even more products that enrich people's lives."

Ikuko Koyama from the Karuizawa plant said: "The ball bearing's 1.5mm external diameter was achieved thanks to our team's efforts throughout the production process. I am really excited that bearings, which are often overlooked, are getting their chance in the spotlight. We boldly attempted to miniaturize bearings to a size never before seen and were able to bring them to market. It's made me realize that hard work pays off and there is nothing that cannot be achieved."

Background of the Challenge

Minebea's predecessor, Nippon Miniature Ball Bearing Co., Ltd. was established in 1951 in Tokyo as Japan's first specialized manufacturer of miniature ball bearings. Since our foundation, we have excelled in the manufacture of miniature-sized ball bearings, the fact of which has synchronized superbly with the trend of light, thin, short and small devices of various kinds at the time. Today, Minebea captures a worldwide market share in excess of 60% in the miniature ball bearings up to 22mm in external diameter (JIS model number 608) (based on an internal investigation).

This Smallest commercially available steel ball bearing has been developed through the passionate efforts made by all concerned parties within Minebea to demonstrate to the world its ability to introduce the tiniest bearing in the world within the framework of "mass-production". In 2009, we have successfully broken the barrier of 2 mm in outer diameter in the manufacture of ball bearings to pave the way for the mass production of such miniature ball bearings.

This bearing is 1.5 mm in external diameter, 0.5mm in inner diameter, and 0.65 mm in width, with 6 steel balls and retainers supporting those balls in it. Despite its compactness, its precision must comply with the Japanese Industrial Standards (JIS) code. On top of that, we were committed to realizing the mass production of those products aiming at performing our mission as the precision component manufacturer. By overcoming a variety of hurdles and tasks that were conflicting and contrary with one another at times, we have finally succeeded in developing miniature ball bearing that can be mass produced on a commercial basis.

We will devote ourselves to introducing new products that will benefit to the society going forward, by demonstrating to the world our ultra high-precision technologies that have been at the core of setting the world record this time around.

Use of ball bearings with 1.5mm in outer diameter

The ball bearings certified as the GUINNESS WORLD RECORDS title are used in the Tourbillon mechanism installed in the highest-grade mechanical watches in Japan. Our miniature ball bearings have been adopted for the first time in the Tourbillion mechanism, the design/development and manufacture of which were considered the most difficult, installed in the mechanical watches, the delicate axels of which have been traditionally supported by jewelries such as rubies. Such an application was featured as the epoch-making event among the independent watch-makers in Switzerland. A new market for the application of miniature ball bearings has been offered to us, leading us to new orders and wider usages and applications on an on-going basis.

Minebea is also recognised by Guinness World Records Japan as the first record holder of the "Takumi Nippon Project" for its bearings, thereby demonstrating Japan's superior industrial technologies to the world over.
The Takumi Nippon Project is a project supported by Guinness World Records Japan in its effort to stimulate and incentivise engineer, researchers and craftsmen in Japan for their insatiable intellectual curiosity and challenging spirits as well as transmitting such information to the world. 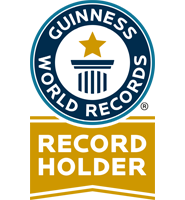 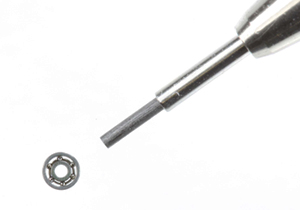 This picture is an image of a ball bearing with 1.5mm in outer diameter

Information in the press releases is current on the date of the announcement.
Product information, contact and other context are subject to change without prior notice.